I went on a 3 night, 4 day camping adventure in the Noosa Everglades and it was an adventure indeed. The word adventure is quite the understatement. As an outdoorsy’ East Coast Canadian, I am used to tenting, yet this camping experience was unlike any I have ever experienced. The word rustic doesn’t quite explain my experience. I truly was camping in the Australian bush.

When the travel agent sold me on the trip she was quite elusive with the fine details, but I was excited nevertheless to camp in Australia so I wasn’t concerned about the itinerary. When I arrived at Gagaju Bush Camp I was in for a surprise. I didn’t really have any expectations, yet I didn’t expect what I saw. The word “bush camp” in this instance is a literal term used to describe a base camp on the cusp of the Australian Everglades with limited amenities. I would for the first time be really camping as apparently what I had been doing before could be considered luxury.

The first night I stayed in the “dorm” which was a ruck shack canvas tent held up by poles on a cement slab. The interior of the dorm had make-shift wooden bunk beds set up with hammock like sacks nailed to the posts to sleep in. With one sheet and pillow in tow this would be my bed for the night. While settling in one of the girls who was on her way out of the bush recommended that I sleep on the top bunk because of the active rats and snakes that would enter the dorm at night. With this information I started to panic. I learned that few girls (some guys included) make it past the first night. I was determined to stay the 4 days, but I was worried I wouldn’t make it. 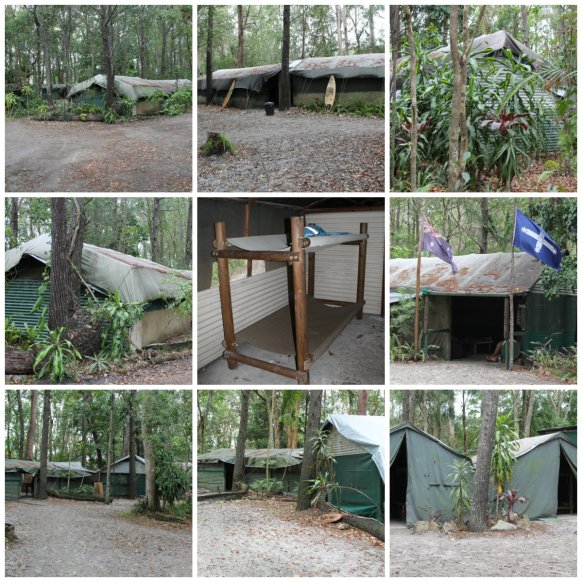 When I was getting ready for bed late in the evening I saw them…the rats. Not just one, but many! I realized then that it didn’t matter what bunk I slept in because the ballsy buggers were running up and down the wooden posts that held up the tent, while also roaming throughout. Reluctantly, I chose to try to ignore what I saw and get some shut eye. I put my ear plugs in and eye mask on; if I couldn’t see them or hear them I would surely sleep. Right? Sleeping in a synthetic hammock-like bunk bed was not the most comfortable sleep of my life, but I slept on and off throughout the night. With only a top sheet I was colder than I expected, but I was in a tent open to the elements in the bush after all. I guess I can count my lucky stars that I didn’t see the large snake slithering its way through the tent like one of my fellow campers saw that night. She moved to the top bunk! 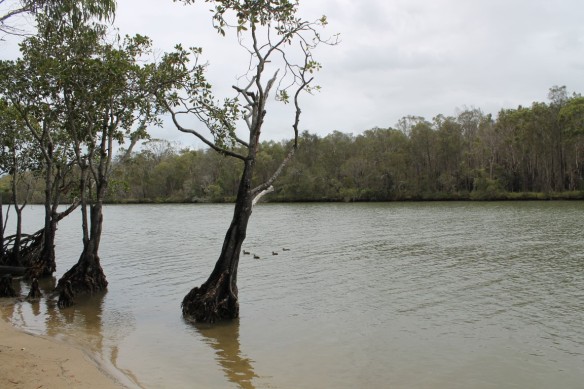 Day two made sleeping with rats worth it! In groups of three we canoed 15 kilometres through the Everglades to Lake Cootharaba and Boreen Point. The river’s current, wind, and waves made canoeing an excellent and tiring workout. The mangroves, birds, jumping fish, and sting ray sightings kept us entertained all day. Unfortunately, or maybe fortunately, I didn’t see any bull-sharks, which they claim swim in the salt water rivers and lakes throughout the Glades. For that reason, I didn’t do any swimming in the murky waters. Ducks happily swam by our canoe as if we were inching our way down the river. This is what camping is all about! Getting up close and personal with nature in an organic and authentic sense. No itinerary, no plan, and no idea what we would see. 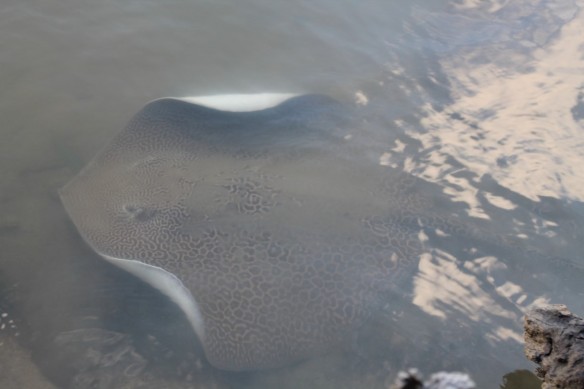 After barbequing my own meal (we had to bring our own food to cook for the 4 days) I sat by the river and watched the sun set behind the trees listening to the many colourful lorikeets playing in the distance. Since it had been raining earlier I was blessed with the view of a rainbow over the river. A moment like this could never be planned or recreated. 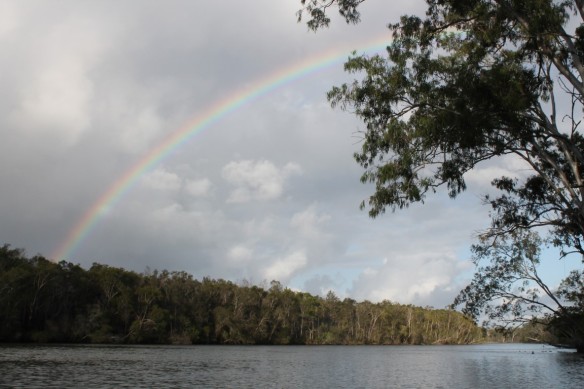 On nights two and three our group was moved to the next phase of bush camping: sleeping in small tents with mats as thin as cardboard. With a rented paper think sleeping bag and only a mat to sleep on I was initiated into real camping. Sleeping on the ground with only a tarp separating me from it made for an uncomfortable sleep and stiff morning. 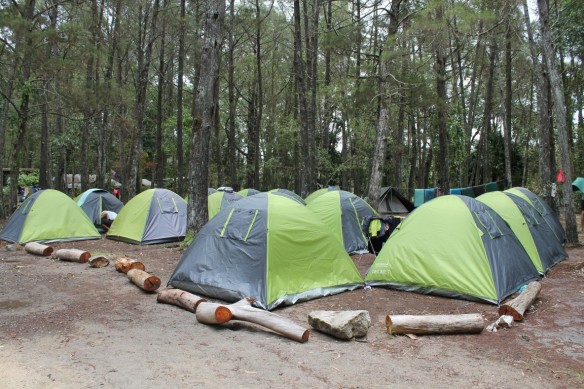 Day three made sleeping on the ground worth it. We canoed from base camp to Lake Coorioibah and went to shore at Arthur Harold Nature Refuge. After a 30 minute walk we came to Cooloola National Park and Beach Recreation Area. Our afternoon was spent on the secluded Cooloola Beach with those from our group who lasted the three nights. Of a group of 18, only 7 were left, myself included. I had surprised myself that I lasted that long. The incredible views kept me holding on. The eagles were active throughout the day flying overhead as if guiding us along our journey. I couldn’t have asked for a better second canoe trip of the Everglades. When it was time to canoe back to camp the lake was like a mirror, calm and still, with the blue sky and white clouds reflecting on it.

Although the camp was basic and the wildlife active, I had an extremely memorable and one of a kind experience. Not everyone can say they camped 4 days in the bush of the Australian Everglades. The majority of people who check into the bush camp quickly check out. I owed it to myself to give it a shot and to prove to myself yet again that I can do anything. I am happy that I did it. I’ll always have fond memories of sitting by the fire, looking up at the bright stars above, listening to the large toads jump past, and having great conversations with new and interesting people. 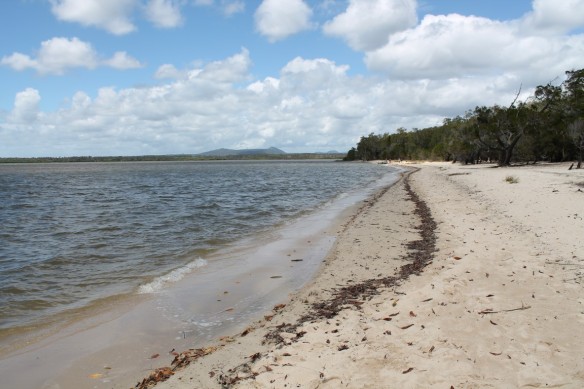 Life really is about going out of my comfort zone and trying new things. Sleeping with rats is something I never expected to do and hope not to do again. Some things you don’t choose to do, but rather are placed in situations where not trying it is not an option. 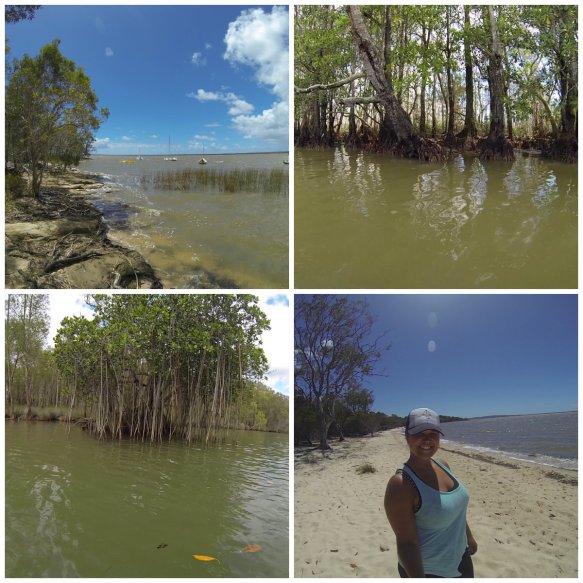