After my caving adventure in Waitomo and Stray’s cultural overnight stop in Mourea we drove to Rotorura, the north island’s steamy, smelly sulphur city. I am really enjoying that Stray does things out of the ordinary. Stray is the only bus travel company in New Zealand to stay at a traditional Maori, while also stopping at various sites other companies exclude. I came to New Zealand to have an authentic experience, rather than a cookie cutter tour of the islands. When we arrived in Rotorura our driver, Seagull, gave us a quick orientation tour of the city highlighting all the points of interest. I decided to “hop off” the Stray bus to spend a night in Rotorura considering it is one of New Zealand’s ‘must see cities’. I was interested in exploring the city’s geothermal activity. 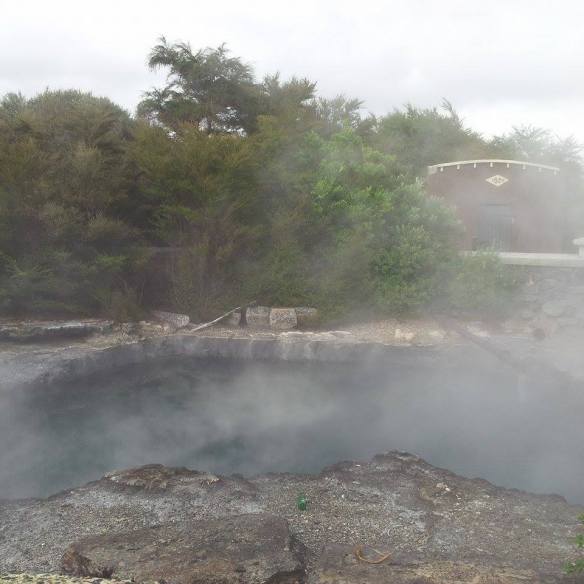 Rotorura is not only popular for its boiling mud pools and geysers, but also for its culture. Over 35% of the population is Maori, and aspects of their culture can be spotted around the city including sculptures, language, and music. Although the most noticeable aspect in the city is the smell of rotten eggs from the sulphur in the air due to the earth’s crust being thin in the area. I couldn’t wrap my head around the fact that people want to live in a region with active geothermal activity, especially since the eruption of Mount Tarawera in 1886 destroyed nearby villages and killed 120 people. Yet, the residence live there with pride. Many of the homes in the area use the natural resource to heat their homes and have their own personal spa pools. Knowing that at any moment the earth’s crust could further open up or crack leading to an eruption was somewhat thrilling, yet frightening at the same time.

Walking around the smoky smelly city was quite eerie. Watching the white smoke billow out of the ground while the wind blew the wretched sent my way made me think that I was crazy to be willingly walking around the geothermal city. I was able to walk around Kuirau Park to access the geothermal activity for free. Throughout the city, I also saw intricate hand carvings disbursed about. Even in the rain, I walked along Rotorura’s lakefront- the second great lake of Kuhumatamoemoe. It wasn’t long before I walked my day away. With limited time in New Zealand I had to stick to a strict schedule and my time only allowed me to spend one night in Rotorura.

The drive from Rotorura to Lake Taupo (where I needed to “hop back on” the Stray bus) was very scenic. Apparently the largest hand planted forest in the Southern Hemisphere lies between Rotorura and Taupo. Ironically, the trees planted there- Radiata Pines-a California native species can also be found in western Canada. The trees normally take 50 years to mature, but only need half the time in New Zealand. The 12-15 thousand trees per hectare stand tall alongside the road. The trees lead me straight into Taupo, where New Zealand’s largest lake rests. In 181AD a volcanic crater erupted which left a massive hole in the ground to then be filled with water and later named Lake Taupo (the same size as Singapore). Taupo means the great garment of Tia, he was a Polynesian chief from Tahiti. Every name and place in New Zealand has a meaning and a story behind it. Both Rotorura and Taupo didn’t disappoint as their history is rich with legends, love stories, and tragedies. I enjoyed learning more about New Zealand in this culturally rich region. 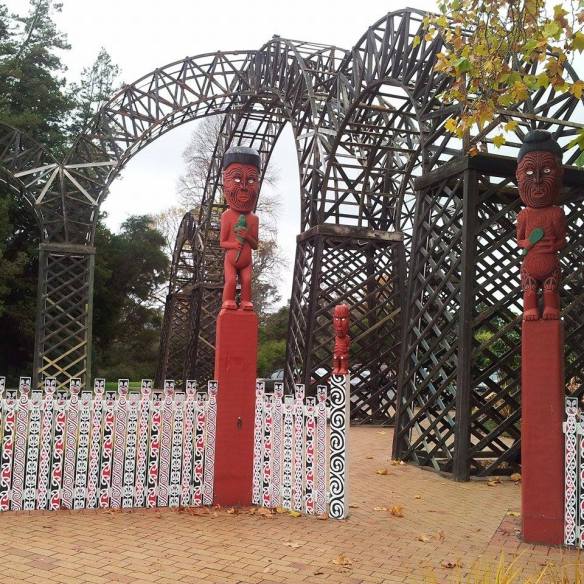