I’ve never been more excited to wake up in a turquoise destination. I quickly got ready and set off for the day. I slowly walked along the Promenade des Anglais by the Mediterranean Sea on the Bay of Angles trying to comprehend the fact that I made it to Nice, France, one of the world’s most famous turquoise European cities. I floated along to the monument aux morts, one of Europe’s most impressive and imposing World War I/World War II monuments. The impressive white stone memorial faced the sea in the same way that I would for my entire time in Nice.

I worked my way to the Old Chateau and hiked the 213 steps for the best panorama view of Nice and the port. Along the way, I observed a one of a kind Israelite cemetery, Roman ruins, and a waterfall. The view from the top was like nothing I’ve seen before—the century old building stretch to the sea longing for its turquoise touch. The metropolitan city is entirely made of historical buildings all shaded by orange and red ceramic roofs. The church peaks reach toward the heavens while the turquoise coast sparkles under the sunlight. It is one of the most impressive must see sights. 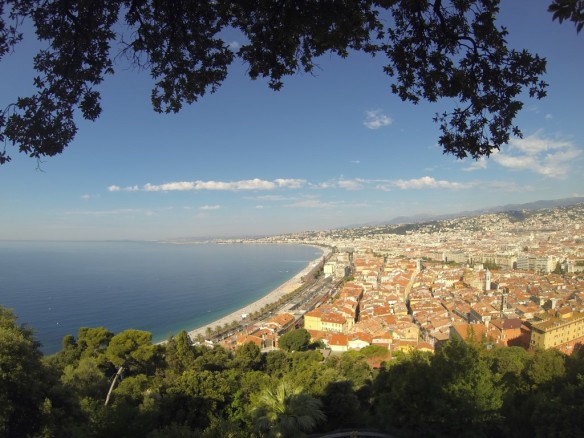 After exploring the markets and checking out the fresh fruit, baked goods, fresh pizza (it is said that some of Europe’s best pizza can be found in Nice), and handicrafts, I meandered down to Nice’s world famous beach. It wasn’t long before I would be called to Nice’s enticing waters. After relaxing under the hot Mediterranean sun on the iconic loungers with blue and white umbrellas at Opera Plage like the rich and famous, it was time for a swim. The refreshing turquoise waves lapped gently on the shore’s pebbles as I entered the water for the first time. With much concentration, I tried to gracefully walk into the water on the uneven stones without shoes (impossible). As much as I imagined myself looking like Bay Watch’s Pamela Anderson going for a swim, the reality is I probably looked like a lost girl have a seizure while trying not to fall into the water with my feet twisting in between the rocks. Unfortunately, Nice’s beach has no soft sand on its beach–just large rocks that are a killer on the feet. Nonetheless, I still can’t help but love Nice’s beach for exactly what it is–a must see beach in the south of France! Who would have thought France would have turquoise beaches? Now I Know. 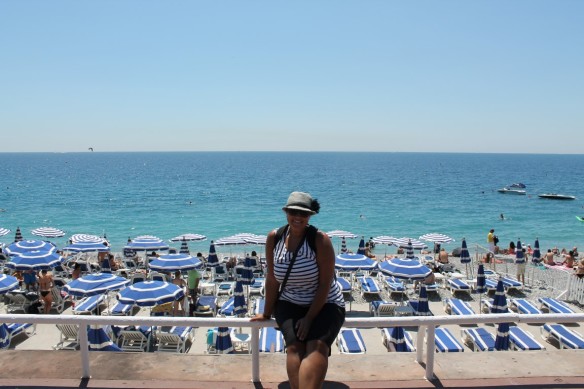 My time in the French Riviera came to an end with a tour of a traditional French perfumery at Fragonard Perfumeur where I learned about the process of making perfumes. Smelling a variety of pure concentrated perfumes made me realize that I love the sweet and floral scents. My favorite scent at the Perfumeur was their popular ‘Belle Cherie’, a combination of manderine, starfruit, jasmine, lily of the valley, tonka bean, and vanilla. It was just delectable! Situatied high on a hill above the perfumery was a stunning yet simple yellow church where Bono was married. From my first look to my last, I just adore the French Riviera.

Where Bono was married