Mexico Diaries
Landing in Mexico as a Solo Female Backpacker
The Best of Traveling Solo in Quintana Roo, Mexico
Adventure in Yucatan, Mexico 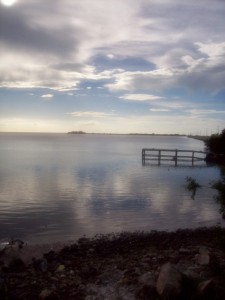 During that first backpacking trip in Mexico in 2008, I was determined to cover as much ground as possible. I traveled throughout the provinces of Quintana Roo, Yucatan, and landed in the province of Campeche after 3 weeks in Mexico. Each province had so many amazing must see sights that I wanted to see before moving on to the next place. If I played my cards right I knew that I would make it to Belize before needing to return to Canada. There was something exhilarating about being able to go where I wanted (and when I wanted), see what I wanted, and to be totally independent for the first time. I had always traveled, but never completely alone. I always relied on the comfort of knowing I was with someone who could speak the language of the country I was in, or had traveled alone before. I often let them take the lead. This time I was in control of my destiny. It was the first time when I really realized (or believed) that I could do it too. Why couldn’t I? After my initial state of shock when I first landed in Mexico, I quickly started getting the hang of backpacking solo for the first time in Mexico. I trusted myself completely. 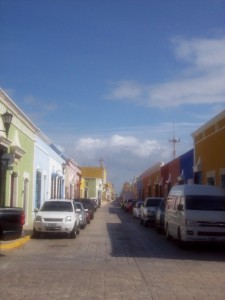 After leaving Merida, Mexico I headed to the city of Campeche, a small quaint fort city on the sea with historical massive walls built to protect the city from pirates. Although there wasn’t much in Campeche, it was a beautiful colourful town with cobble stone streets and a slow relaxed life. The almost walled picturesque city would have concerts in the park each evening which was a great place for me to relax each night, while listening to typical Mexican music and munching on Mexican delicacies. Knowing that my time in Mexico was limited I soaked in every possible moment, and knew that I would have this experience with me for a lifetime. This tip made me a backpacker and this trip made me a solo female traveler. This trip is now part of who I am.

After Campeche, I took a local overnight bus to Chetumal. The horrific drive seemed as though it would never end. We literally drove through the jungle on thin windy roads which were surrounded by trees hanging over the roads and with little sun light. To my surprise, the Campeche province is not flat like the others. We drove up and down mountain-like terrain which made the drive slow and rough. I was literally in the middle of nowhere. There was nothing between Campeche and Chetumal. I often questioned what would happen if we broke down. I knew the ride would be worth it in the end, because I would have come full circle around the bottom peninsula of Mexico covering all three provinces. Along the way, I saw some more Mayan ruins in the distance in the central part of the Campeche and Quintana Roo provinces. They are remote and hard to access due to the fact that they are literally in the jungle. The next day, I arrived in my destination after what felt like forever. I would later learn that this little journey would be nothing compared to some of my other travels around the world. It’s all in the journey right?

After catching up on my sleep at a small hostel where I was the only guest, I ventured into the city to visit the museum, wander the streets in the center of the city, and the Bay of Chetumal. The next day, I went to the lake city of Bacalar which has a nice relaxed beach town vibe. Bacalar is just outside of Chetumal and its name means the sea of seven colours. You will notice by the picture below of the lake that it’s spectacular in various shades of blue. It’s a tranquil place with no tourists; I was the only one wondering the quiet streets of Bacalar as if I was the only one there at all. Every now and again, I would pass by a local who I would greet that quiet afternoon. I try to find the secret stunning places where travelers do not venture due to its unpopularity or remoteness. It’s this trip that has made me appreciate being in a place of silence, being alone with my thoughts, and knowing that I am my own best company.

Next up…Belize…before returning back to Mexico.

14 thoughts on “The Exhilaration of Traveling through Campeche, Mexico”