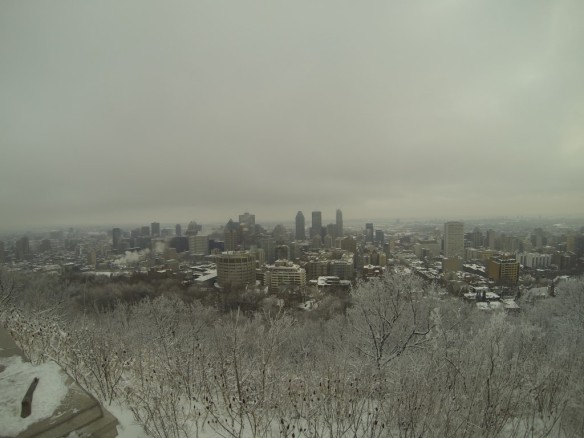 As a teacher, I was anticipating Christmas break weeks prior to the last day of school. As you can imagine, my students, like myself, were anxiously awaiting a much needed holiday. When it finally arrived, I departed the Maritimes bound for Montreal, QC where I would spend part of my break with my boyfriend and his family. I hadn’t seen my boyfriend in 10 days so I was extremely excited to see him and spend my first Christmas with he and his family in Montreal. Like a kid in a candy store, I was wide eyed and thrilled to go on a mini-vacation. It was 4 months prior since I had been on a flight and I was starting to get withdrawal. After 14 months of traveling full time to 22 countries and on 65 flights, I was starting to feel more at home on the road than in my actual home. I felt relief and excitement to get my fill of air travel and big city explorations this Christmas break. 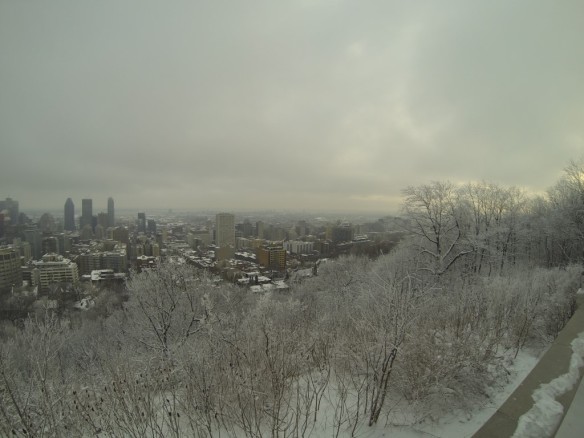 Due to the fact that my boyfriend works for a northern Canadian airline, he is based in northern Ontario, while my job has me residing on the east coast. We are lucky enough that his schedule allows him to come home every 10 days for 5 days at a time, but it’s not ideal that we can’t see each other whenever we want. We somehow (crazily) managed to make it work while I traveled the world on my sabbatical, so I knew that we would make this year work too. We have been able to get through the last 4 months since my returning to Canada, so I was extremely ecstatic when I found out that his employer scheduled him with 8 days off during my vacation (as a teacher, I automatically get two weeks off at Christmas). It would be such a joy to spend 8 days of pure bliss with him in one of my favorite metropolitan Canadian cities, rather than the typical 5 day visit. Not only was it my first Christmas in Montreal with his family, it would be the second Christmas in 5 Christmas’ that we have been able to spend together. Typically, I go to see my family in Nova Scotia for Christmas, while Corey goes to see his family in Montreal (divide and conquer right?). It was always easiest to coordinate that way since we live in between both provinces. I’d go south east, while Corey would go west. There was one year that Corey and I spent Christmas with my family in New Brunswick (that was our first Christmas together after 3 Christmas’ of being apart). In the end, we’d usually spend New Year together and that always suited us just fine. As long as we saw each other and our family it didn’t really matter when. I knew this year would be an extra special one since we planned the holidays the opposite this year.  Christmas in Montreal with Corey and his family and New Year in New Brunswick with my family. Change brings excitement, new traditions, and unforgettable memories. This is a trip I will never forget. 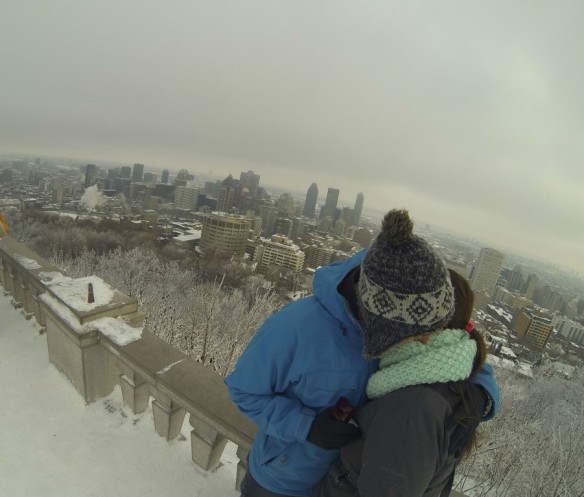 As soon as my holidays started, I immediately left for Montreal. After arriving in Montreal, I reunited with my boyfriend after 10 days.  With only 8 days, we quickly got settled in and started the tour of visiting family and friends, while spending some alone time together. It wasn’t long before we started seeing those who were looking forward to seeing us. Two days after our arrival, Corey suggested  we spend a day together. I was looking forward to seeing more of Montreal that I hadn’t seen during previous trips. I have been to Montreal countless times, yet there is still so much I haven’t seen. I was keen to visit the Jean Talon Market after hearing so much about it from other travel bloggers. I knew that Corey hadn’t been either even though he grew up in Montreal (crazy eh!?), so I knew it would be the perfect place for us to visit. Corey suggested we visit Mont-Royal, a park with incredible views of Montreal. I had mentioned to him earlier that I wanted to visit Mont-Royal to get some pictures for the blog. I knew our day exploring Montreal would be a perfect one. What I didn’t know was that my perfect day in Montreal would conclude with such a happy ending. After doing a little bit of travel accessory shopping at Mountain Equipment Coop (MEC), buying matching holiday pajamas for Christmas eve, and nibbling our way through the Jean Talon Market we made our way to the snow covered Mont-Royal. The weather was much colder than it had been the days prior. It was slightly overcast, with the sun trying to peep through the clouds. At the top of Mont-Royal, there was a winter haze that hung in the air. The previous snowfall covered the trees perfectly and it was picture perfect! I knew it would be a great day for travel photography to show off Montreal on the blog. The walk up to the Chateau Mont-Royal lookout was cold and brisk. I walked quickly alongside my boyfriend, while I complained how much I hate the cold and wished I was in a tropical destination. At times, I covered my mouth and breathed into my scarf. As cold as it was, I couldn’t help but comment on the stunning views all around us on the trail. The snow flakes rested on the tree branches as if being placed there individually. The white haze atop the mountain made it a perfect Canadian winter day. When we reached the lookout point I was left speechless at the view of the city. I immediately started snapping photos of the snow capped skyline. The view was better than I expected. 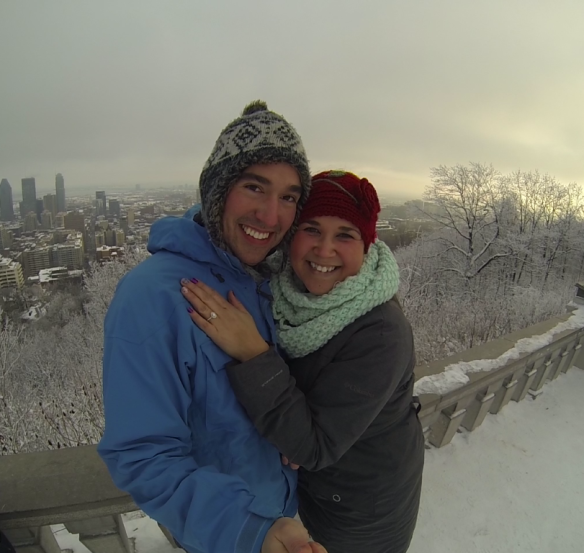 I got my GoPro all set up on my XShot to get some pictures of Corey and I with Montreal’s spectacular view in the background. I set up the camera to take 1 picture every second knowing that I could pick out the ones I like best. As I held out the XShot and smiled at the camera with “tourist” stamped on my forehead, I noticed in my peripheral that Corey wasn’t looking at the camera. I looked at him and laughed as I said ‘you’re not even looking at the camera’. That’s when I noticed that he was holding a small box in his hand. I looked down and realized it was a dazzling diamond ring. He then asked me with a relaxed assurance ‘will you marry me’. My mouth dropped to the ground, and my eyes swelled up like melons. I was star struck for I don’t know how long. I remember I kept looking at the ring and looking up at him and then back down at the ring. I was speechless. Shocking I know. It is hard to make a chatty Cathy like me silent. I couldn’t speak. When my voice returned to me, I remember saying “what”, “are you serious”, “how did you do this”. He asked me again with a big smile on his face, ‘will you marry me’. With tears streaming down my rosy cheeks, I stared into his beautiful confident eyes and before I could speak he said ‘you didn’t say yes yet’. Overjoyed, I said “YES”. I also think I said repeatedly ‘oh my gosh’, but he would know best. 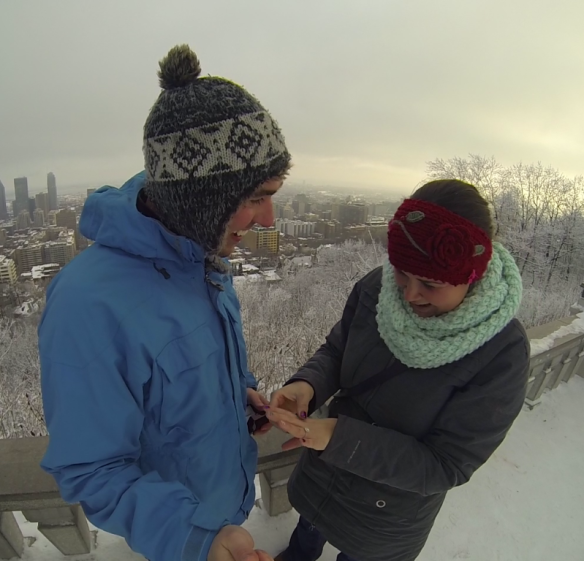 In that moment, he and I were the only ones at Mont-Royal overlooking Montreal on that perfect winter day. I hugged my fiancé repeatedly, while staring in awe at the diamond ring he designed for me. It’s beyond perfect. I was on cloud 9 (I still am), I walked around floating on a cloud not believing what had just happened. I kept asking him ‘is this real, are we really engaged?’. At some point we switched the GoPro to movie mode and I remember looking into the camera with overwhelming joy and excitement and stated: ‘I’m engaged!’. Shortly after, we were being congratulated by onlookers. Walking down Mont Royal, I no longer noticed the cold. What an unexpectedly perfect winter day in Montreal. Montreal is known to be one of the most romantic Canadian cities; now I know for sure that Montreal is the city for romance. My fairly tale has begun in Montreal. 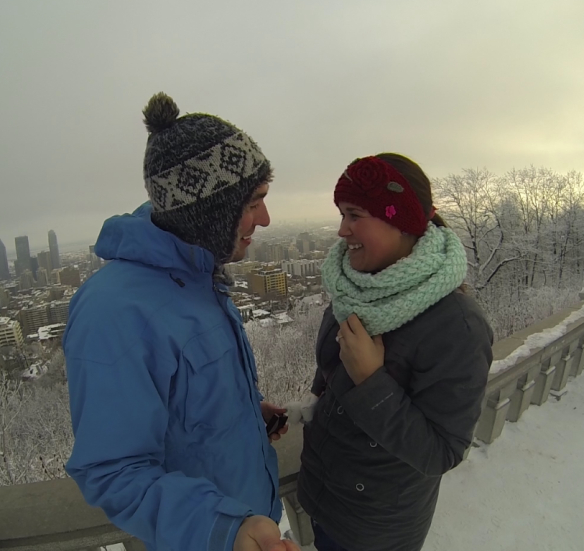 A winter solstice proposal sounds like the perfect engagement to me. After my week in Montreal, I returned back to Atlantic Canada an engaged woman and a fiancé. 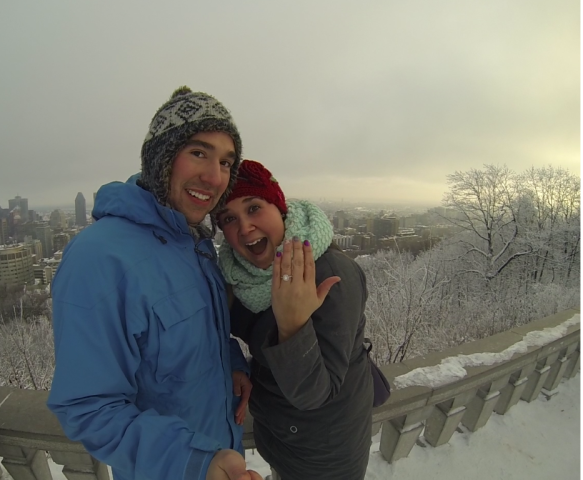 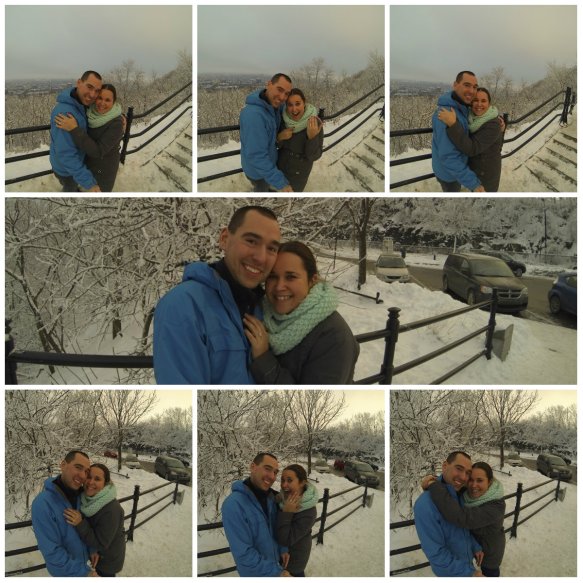 100 thoughts on “Departing a Girlfriend, Returning a Fiancé: The Story of Our Engagement”