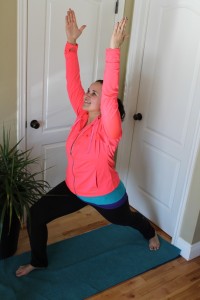 At this stage in my yoga journey, I have started to push myself further by attending some advanced yoga classes (sometimes I think I am nuts) and attempting the intermediate and advanced postures during my ashtanga and vinyasa practice. It’s challenging, yet I am up for the challenge. There is something rewarding about doing something outside of my comfort zone. I’m not always successful, but there are moments (even glimpses of moments) when I surpass my expectations. Often times, my ego gets in the way and tells me that I can’t do it or that I’m not good enough. I’ve been trying to overcome these thoughts by giving it a try anyway. It can’t hurt right? Like in the movie Spanglish, the main character says in broken English over and over again “just try it”. I’ve been just trying it. It’s in these moments, when I am working beyond my comfort level that I need a solid ground to stand on. I’m able to do just that with my new non slip yoga towel.

To further support my yoga practice recently, I’ve regularly been using my new turquoise Zeroslip Yoga Towel during my ashtanga and vinyasa yoga classes (and pilates too).  Thanks to the yoga accessories wholesaler Dusky Leaf, I was sent a free sample to try out their state of the art Zeroslip Yoga Towel. I’m so thankful for the opportunity, because prior to receiving the non slip yoga towel, I didn’t have one of my own. Prior to using the towel, to be honest, I was skeptical about the zero slip claims of this yoga towel. How could a towel placed on top of my yoga mat not move or prevent me from slipping? I’ve used regular beach towels and travel towels over top of my yoga mat in past hot yoga classes with no success. I wondered how this yoga towel would be any different. Initially, I expected my hands to naturally slide forward in poses like downward dog as they have in the past with other towels. Not only were my hands not sliding on the towel, my feet were not slipping either. Miraculously (and to my surprise), the towel stayed put with each posture in the ashtanga primary series. I can now fully understand the benefits of using this particular yoga towel for hot yoga and active yoga classes.

After using the towel for the first time I was amazed. Class after class my amazement continued as the towel held true to its name: zeroslip. I was completely astounded as my misconceptions about this towel were completely wrong. With this towel, I can stand strong in any yoga pose without the worry of slipping and sliding around on my yoga mat during the most hot and sweaty classes. 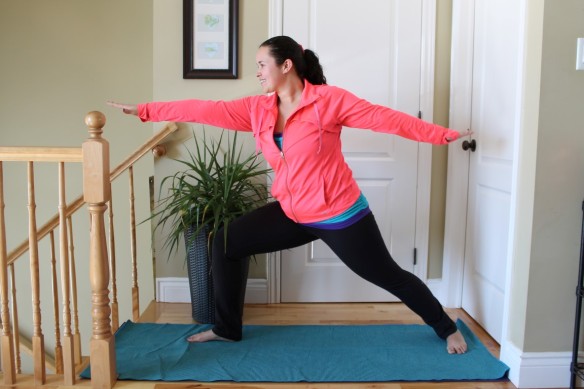 The towel’s backing extends across the entire surface area and not just a spattering of dots/nubs on one side. The backing of the towel when placed on the floor or on top of a yoga mat creates an extremely effective friction and stays in place. The biodegradable non-slip surface and unique bamboo charcoal fabric helps it to stay put when in a pinch or on the go. I was surprised when I found out that this one of a kind yoga towel can be doubled as a travel mat as it does not need to be used over top a yoga mat.
This particular yoga towel offers more cushioning and traction than a regular yoga towel, which in my opinion, makes it good for pilates classes as well. The towel atop a yoga/pilates mat adds more support for the difficult poses that put a lot of pressure on the hands, knees, elbows, and hips.

Let me tell you how the Zeroslip Yoga Towel works-This state of the art yoga towel provides a hygienic anti-microbial layer between me and my yoga mat. The top fabric of the towel is made from a blend which includes nanoparticles from bamboo charcoal–which has anti-bacterial and anti-fungal properties that reduce odor and buildup. Who would have thought there is a yoga towel that exists which neutralizes bacteria?

Eco Backing– The bottom of the yoga towel is made from an innovative biodegradable non-slip surface. As you know and have read before, the more eco-friendly a product is the more appeal it has to me as a consumer.

Rock Solid Bonus– Their motto states “Every Dusky Leaf product is designed to delight and to inspire you in your yoga practice.” Dusky Leaf has a rock solid (as they call it) satisfaction guarantee return policy. If you’re not completely happy with your individual purchase you can return the item(s) within 90 days to get all of your money back.

Dusky Leaf’s Zeroslip yoga towel is helping me to stand on solid ground and hold a pose with confidence. I can say with assurance that no matter what challenge I am faced with, I am ready for that challenge! My second full weekend of my Yoga Teacher Training is coming up in a week and I’m ready!